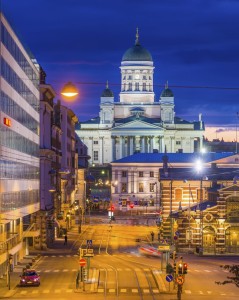 The City of Helsinki issued call for tenders for the outdoor lighting in 2013, and ISS Services with C2 SmartLight lighting control solution were chosen to carry out the project. The offered cutting-edge lighting control system aimed to reduce the energy consumption caused by unnecessary lighting providing light on demand and making public spaces safer.

Upon initiation, the city of Helsinki placed a goal to reach 20–25% energy savings, which had to be obtained avoiding complete lighting switch-off during nighttime. Smart lighting was customized to specific city areas in the following ways:
• The brightness of LED luminaires is adjusted based on the amount of light. The network of lighting sensors in the area determines the amount of natural ambient light and sends measured values to the central system.
• The lighting level of LED luminaires is also optimized to weather conditions at that moment. The data from meteo stations is delivered to centralized management solution and used as one of the lighting control parameters.
• The lighting can be regulated according to the volume of road traffic. The amount of light can be set to increase and decrease with the traffic intensity.
• Not only group of luminaires can be controlled separately, but also individual luminaires. That helps to ensure right light quality at demanding zones such as road cross sections and pedestrian crossings.
• The light of special outdoor areas, such as playgrounds, sport fields and parks can be triggered by wireless motion sensors.

Centralized management system enabled to automatize all light control processes, so that no one has to constantly monitor the user interface. Advanced alert system is implemented for the city of Helsinki, and it reports problems to maintenance personnel by email or SMS message telling where malfunction occurred and what is it. The optimization of illumination level by dimming allows utilizing same-power luminaires for the wide range of areas, hence reducing inventory costs and easing maintenance.

The lighting control solution in Helsinki consists of the centralized management system and control equipment. The entire system became a part of internal network of Helsingin Energia and is maintained by ISS Services. There is no access to the control room from the outside of the internal network. All data communication is encrypted between the user interface and control devices installed on site.

The street lighting cabinets in Helsinki are equipped with C2 SmartLight control units that switch the electricity of the lighting network on and off. The luminaires or the light post have luminaire-specific controllers that enable the controlling of each luminaire. Lighting in specific areas, such as playgrounds and sports fields, can be controlled with wireless motion sensors and push buttons to ensure that the lights are on only when there are users on the area. “The security of the system has been a high priority. Helsingin Energia trusts the supplier they choose,” says Kari Rantanen, Service Manager in ISS Services.

The text is partially based on the article “Tavoitteena tarpeenmukainen valaistus” published in Valo magazine in January 2014 (“Aiming for Demand-oriented Lighting”).