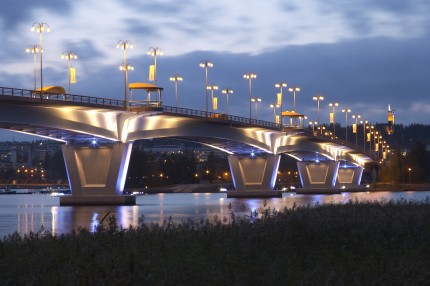 Jyväskylä is proud to be called the city of light, and has gained attention internationally with its smart city lighting, ranging from street lights to colorful lighting installations illuminating entire bridges and facades. In 2009 Jyväskylä renewed its light control system and begun changing old mercury-containing light bulbs to LED luminaires that are both long-lasting and energy efficient. With the new light control system and smart luminaires the city of Jyväskylä saves 600 000 euros annually.

When Jyväskylä, the rural municipality of Jyväskylä and Korpilahti merged in 2009, the amount of outdoor luminaires increased from 19 000 to 28 000. There were several light control solutions and fault management systems that needed to be standardized. Additionally, the city of Jyväskylä has signed the energy efficiency agreement for municipalities, which aims to achieve 9 % energy savings by 2016 and 20% savings by 2020. Consequently, the Pro-Environment Outdoor Lighting Project was born.

Jyväskylä received a sizeable investment subsidy for the project. Funding is provided following the ESCO concept: savings from the energy investment are used to recoup the expenses. “We chose C2 SmartLight to control, monitor and maintain the lighting control of Jyväskylä city lights, because the lighting solution met the technical requirements of our city and does not require the upkeep of new information systems,” says Kari Ström, Deputy City Engineer.

C2 SmartLight centralized control system was chosen to control the 426 switching cabinets. The new lighting schedules included optimized switching times for different areas. In areas with many citizens, the lighting needs to be efficient, while in areas with less population, the lights can be switched off for the night times without compromising safety.

The aim of the project was to update the lighting and its control system to meet today’s requirements, and thus save nature and energy. The goal was to reach 20% annual savings by 2017. The goal was met by replacing old luminaires with LED lights that consume less energy and by using the C2 SmartLight lighting control solution that enabled the lighting to work at the right place and at the right time.

By the end of 2013, the savings accumulated to 25.1%. By the end of 2014 the use of light control alone saved 27.2% in energy consumption. The city of Jyväskylä estimated that the savings resulting from the Pro-Environment Outdoor Lighting Project reached 40%.

The investment has already recouped with the obtained energy savings.