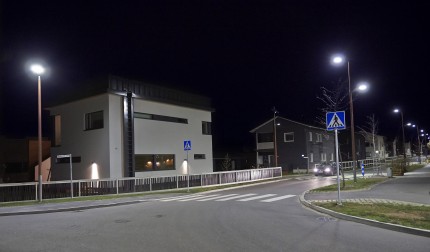 Total luminaire specific control was deployed at Aijalanranta, residential area of Jyväskylässä.  In September over 1 000 inhabitants will settle in the new city area.

All lights of streets and pedestrian bridge, parks and playgrounds are controlled individually according to the needs. Nowadays city obtained 57% of energy savings from utilization  of smart control system in comparison with conventional methods of lighting control. Energy efficiency is reached by deploying LED luminaires, which provide lighting according to the needed lighting output at specific time and at specific place respectively. Street lighting of residential area is provided by 87W LED luminaires, which are equipped with  C2 SmartLight controller  which adjust output light power according to the application area. The lighting maintenance of the area became easier and maintenance costs decreased. In practice, maintenance organization does not need to think what type of luminaire should be installed here 40W, 60W or 80W luminaire. They change luminaires to luminaire of the same power and then it is automatically dimmed by control solution according to the required light output of this area.