Smart lighting of the city of Helsinki

The city of Helsinki is used to lighting in such a way that there is always enough light. In this case, new light sources have ended up over-illuminating the urban environment, especially in snowy weather. The C2 SmartLight control system automates the control of street and special area lighting so that each area always has the optimized lighting.

Helsinki Energy tendered the City of Helsinki's outdoor lighting control system in 2013, and the C2 SmartLight control solution delivered by ISS Palvelut Oy was selected. Juhani Sandström, Lighting Manager of the City of Helsinki, says that the acquisition of the control solution was started due to energy savings and its main goal was to avoid unnecessary lighting. "The old system did not allow anything other than the on/off-control with half of the city-precision." says Sandström.

When launching the renovation project of the control solution, the city set an energy saving target of 20–25%. The City of Helsinki does not introduce total lighting night shutdown in different areas, but the lights on and off are scheduled according to the needs of each area:

Helsinki is entering the LED era

The City of Helsinki owns more than 86,000 outdoor luminaires. The most common type of lamp is still high pressure sodium, which accounts for almost 60% of lamps. There are about 25% of mercury lamps. The exit of mercury lamps from the EU market in 2015 has accelerated the replacement of luminaires in recent years, and in the future Helsinki will use dimmable LED outdoor luminaires in all new installations. LED luminaires are long-lasting, use significantly less energy than other luminaire types, and their light color is naturally pure.

The control solution brings cost savings to maintenance, as the automation of fault alarms speeds up maintenance procedures. Another significant improvement is that the number of luminaire variations with different wattages was reduced. Thanks to wireless luminaire-specific control, the city can use, for example, two luminaires of different power classes from the same luminaire manufacturer, which can always be adjusted according to the lighting needs of the application. Maintenance and logistics are facilitated when separate 30W, 40W and 60W LED luminaires are not required, but all power classes can be covered by adjusting the 60W luminaire according to the needs of the respective location.

Technical implementation of the control solution

The control solution of the City of Helsinki consists of an information system and field equipment. The servers are maintained by ISS and placed as part of Helsinki Electricity's internal network. There is no access to the management environment from the outside. Also, all communications are encrypted all the way from the user interface to a single luminaire-specific controller. Data transmission in the telecommunications operator's network is closed to outsiders and it is not possible to contact the subscriptions in the street lighting centers from telecommunications subscriptions other than those used by the customer.

Street lighting centers have central control devices that switch the lighting network electricity on and off. Luminaire-specific terminals can be installed inside luminaires or luminaire poles, which enable the lighting to be adjusted according to the target. Separate wireless terminals are available for the desired special areas, such as playgrounds or hobbies, which enable separate control of the power supply of the area's lighting. “Special attention has been paid to the safe use and protection of the system at the customer's request. Helen trusts the supplier it has chosen, ”says Kari Rantanen, Service Director of ISS Palvelut Oy. 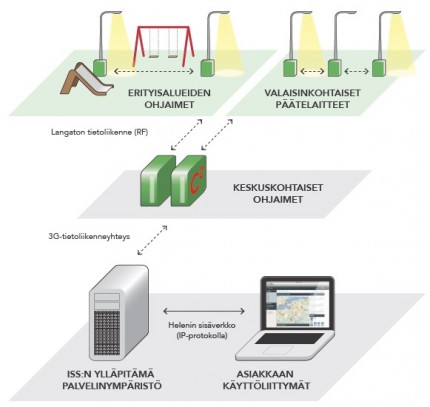 Photo (Valo magazine 1/2014): The twilight control settings, regional energy saving parameters and even the amount of luminous flux produced by a single luminaire can be set from the energy management control room according to the season. All communication of the control solution is completely wireless and does not require new cabling. Due to wireless data transmission, special attention has been paid to the data security and protection of the system, and for example all communications are encrypted all the way to a single luminaire.

The text is based on the article published in Valo magazine 1/2014.